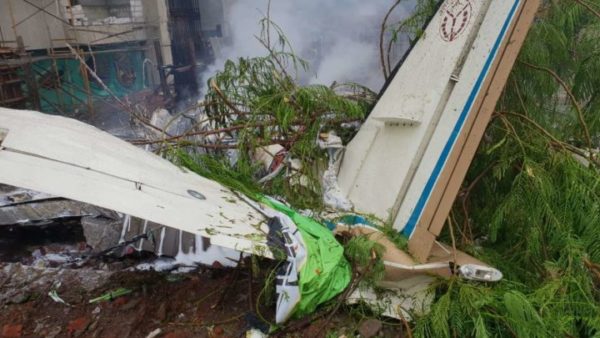 The plane crashed in Ghatkopar: The Chartered plane, which was hit by a tragedy on Thursday in Ghatkopar of Urban, did not have the necessary eligibility certificates for aviation. The aircraft was flying 10 years ago before the tragedy. Civil Aviation Minister Suresh Prabhu has ordered DGCA to investigate the plane crash. Five people, including two pilots, were killed in the tragedy.

Maintenance work was going on for a year and a half
In a statement issued on Thursday evening, the Civil Aviation Ministry said in a statement that “the aircraft was last time flying on February 22, 2008 when it was with the Uttar Pradesh government.” In 2014, the aircraft was bought by MS UVI AVS.

In the last one and a half years, After the work was done, the first test flight of the aircraft was in flight. DGCA had to issue a certificate for the eligibility of flight. ”
– The government said, “According to the rule, the certification of whether the aircraft is suitable for aviation before any test flight is required, which is disclosed by additional staff, maintenance, staff, and overhaul department.”

Pilot Maria Zubri’s husband Advocate Prabhat Kathuriya accused the company of flying on the plane despite the bad weather.
Maria said on the phone that due to bad weather, test flights are not possible, as tasting in such an environment can be dangerous. Maria stopped the phone after a brief interaction with Prabhat.
Prabhat also said that after some time Maria again called him again. Maria said that despite the bad weather, the pressure is being made to test the aircraft.
Now Prabhat has demanded action on the company.
– DGCA officials have got an Air Voice voice Recorder, which will help them in the evidence of how to reduce the tragedy